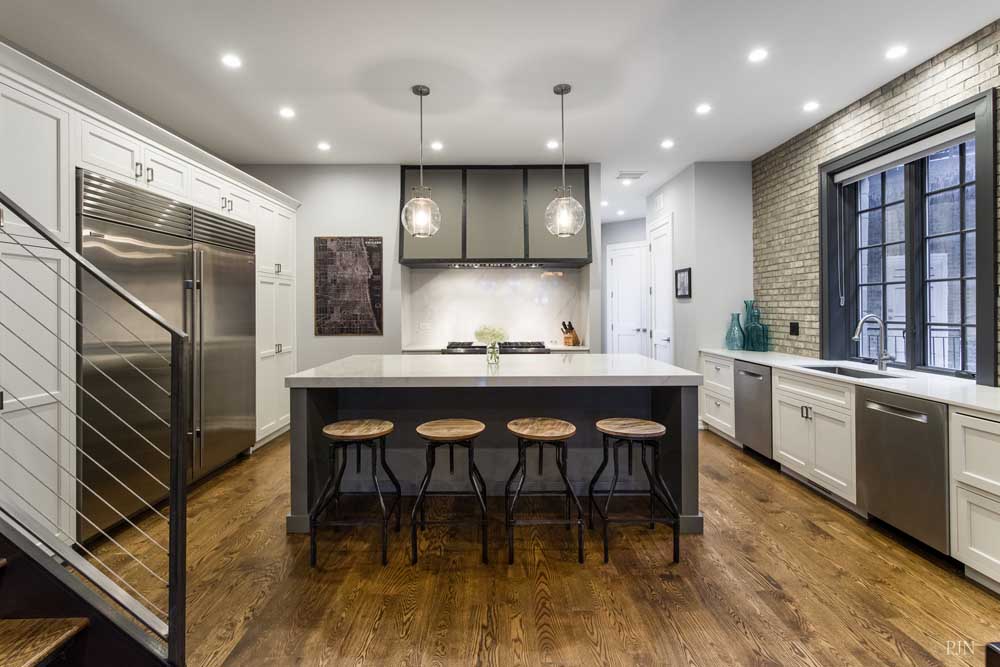 North Clybourn Residence: This project is unique in the fact that the site is land locked without any access to an alley and it also goes between two major streets, so it is considered a through lot. In addition to the site configuration, the property is zoned for multifamily living and has a three story rental building facing one of the streets.  As such this project by code is an addition to an existing building.  To create the concept of this being a single family home, we used the second means of egress that is required for multifamily building in between the existing building and our new construction.  Thus our new building shares the means of egress with the existing building.  The owners wanted the new construction to feel like an independent building, as a typical city infill project.  I was designed with the living spaces on the first floor and basement and the private spaces on the second and third floors.  The third floor is a master bedroom suite that also has its own type of “family room” concept that opens out on to a roof top deck and still has access to their private master bedroom area. The overall character the owners created was a more urban industrial chic look, playing off of the areas close proximity to a formal steel plant. 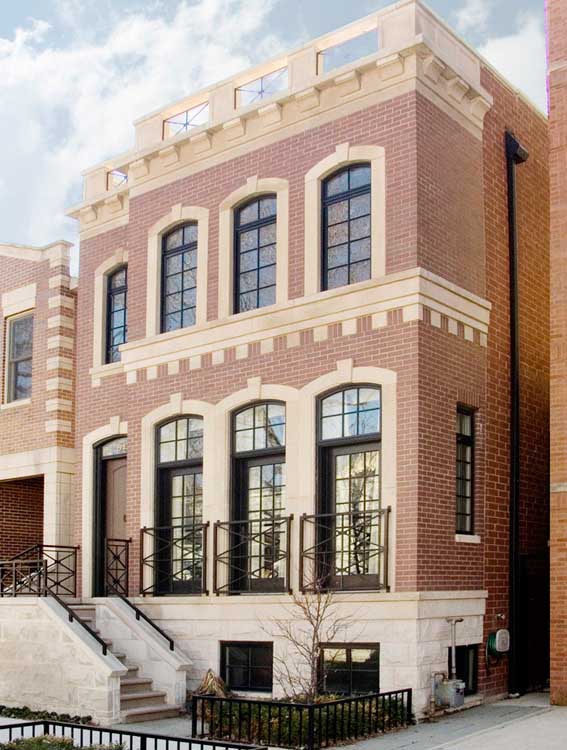 School Street Residence: Located in the Roscoe Village neighborhood of Chicago, this new four bedroom, two story plus basement, single family residence is constructed on a typical Chicago lot of 24'-0? wide by 125'-0? long. A raised rear yard is built over a underground connection to the garage, so the Owners can stay indoors with there young children during the cold Chicago winters. 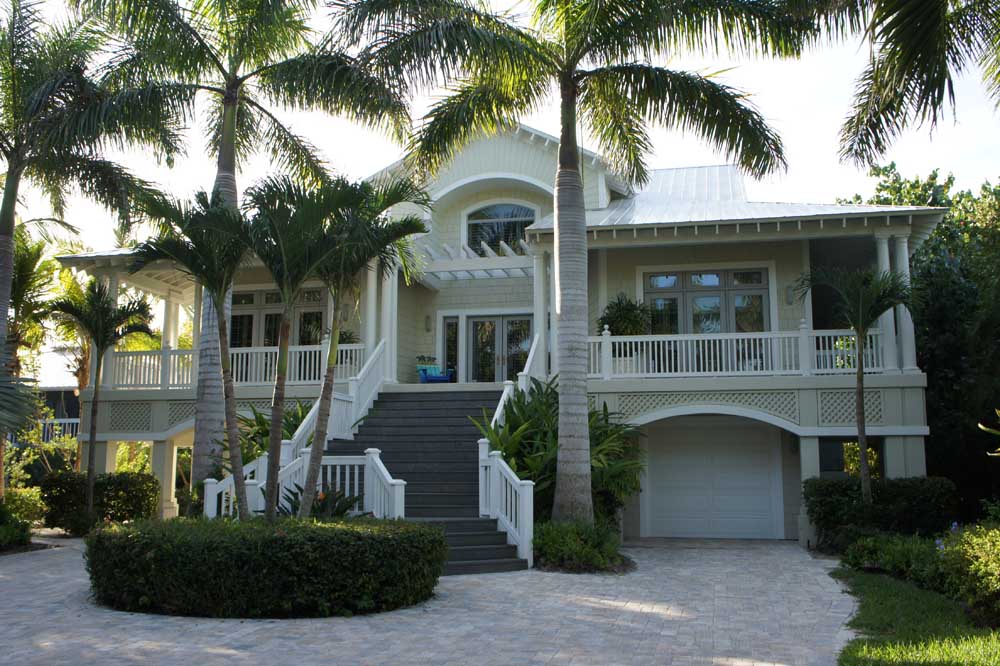 Sanibel Island Residence: Located on the gulf coast of Sanibel Island in Florida, this 6,000 square foot residence was designed as a winter retreat and a future retirement home for a Chicago businessman and his wife. It was designed to capture the beautiful gulf views, with all the common areas looking out over the ocean. The upper floor consists of the master bedroom suite complete with his and her individual bathrooms and dressing areas. It is accessible via a curved grand staircase in a two story sky lit space. The sleeping area looks out over the ocean and has a private terrace. 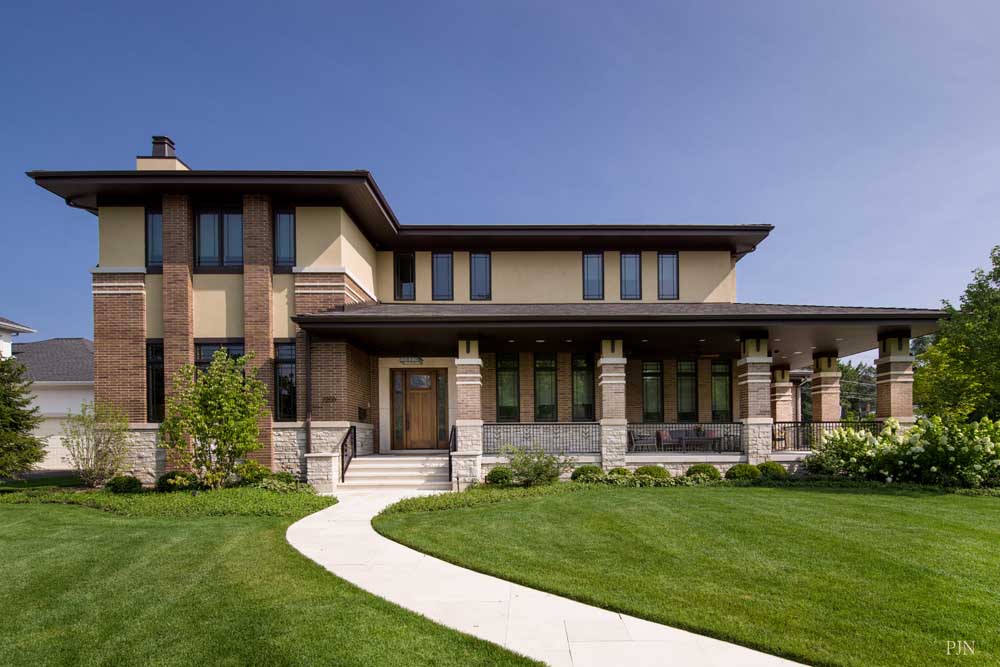 Northshore Residence: The owners of this house came to use with a corner lot they had purchased and wanted a new home built on it.  There desire was to have an exterior done in a Prairie Style look, but the interior would be more modern with comfortable living.  Given the corner lot location, we were able to create a wrap around front porch that was one of the wishes of the owners.  This porch also allowed for the large overhangs common in Prairie style architecture.  The exterior was detailed with 12” long bricks ending in capped limestone bands.  The upper floor was stucco.  The first floor railings incorporated a Prairie Style motif, as well as the main entry door in the stained glass elements.  The first floor was created with twelve foot ceilings.  This allowed for unique ceiling details in many of the rooms.  The kitchen was open to the family room which had a wood accent wall built from the trees that had been taken down on the property to build the home.  A ninety inch TV was an accent over the sixty inch linear fireplace, with each of these elements flanked by vertical built in shelving units.  The family room opened out to the grand terrace that was partially covered over one of the dining areas.  One feature of the family room was the 600 gallon tropical fish tank.  A grand steel staircase led up to the second floor which had an open meditation area from which the bedrooms could be accessed.  Each of the children’s bedrooms had an en-suite bathroom.  The master bathroom featured recessed ceiling details with cove lighting, his and her closets and a master bathroom. 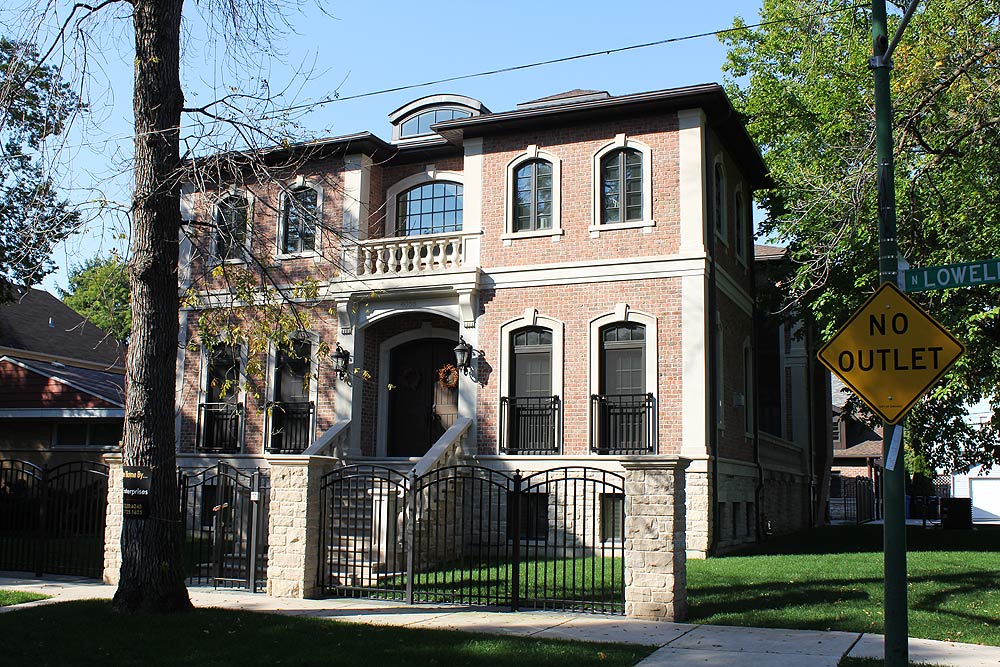 Lowell Residence: This was a new single family residence located in the Old Irving area of Chicago.  It is situated on a corner lot, and the owners wanted a formal front street façade that around the corner became a little more open.  The side of the house features a curved wall that encloses the circular staircase to the second floor.  There is an outdoor patio on the side of the house. 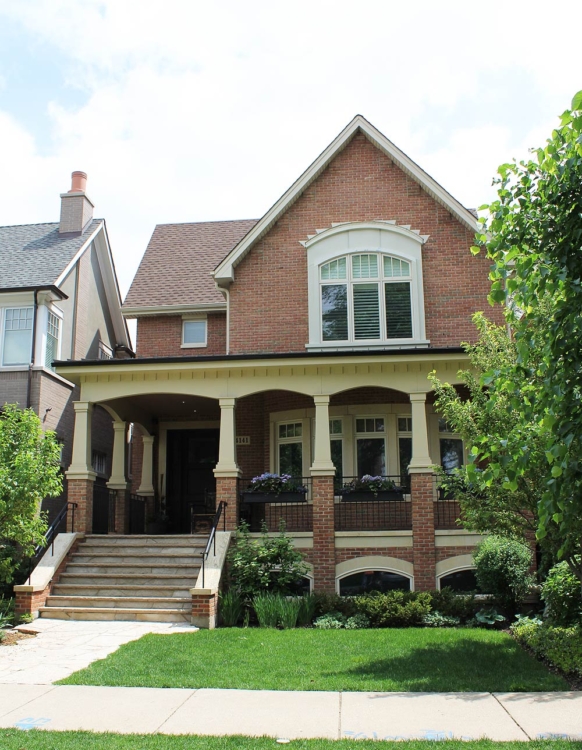 Hermitage Residence: This new 4,400 square foot single family residence is located on the north side of Chicago. The five bedroom home is designed for a growing family, that wanted spacious rooms and family gathering areas inside, but also has the open back yard for the children to play in while staying in the city limits of Chicago. 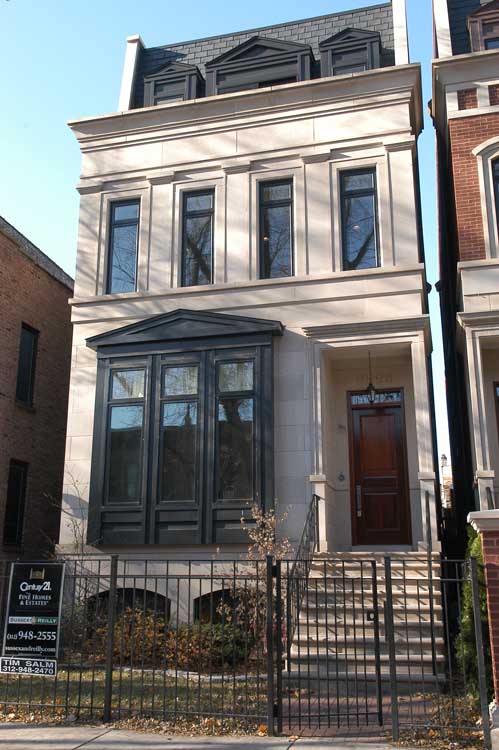 Burling Street Residence: This development consists of two single family residences located on Burling in Lincoln Park in Chicago. The homes are identical in plan, but mirrored when built. Each façade has its own features in order to give the homes the individuality along the street. There are three floors plus a basement that house the five bedrooms and six and a half baths. The third floor has a roof deck that has unobstructed views of the western sunsets. 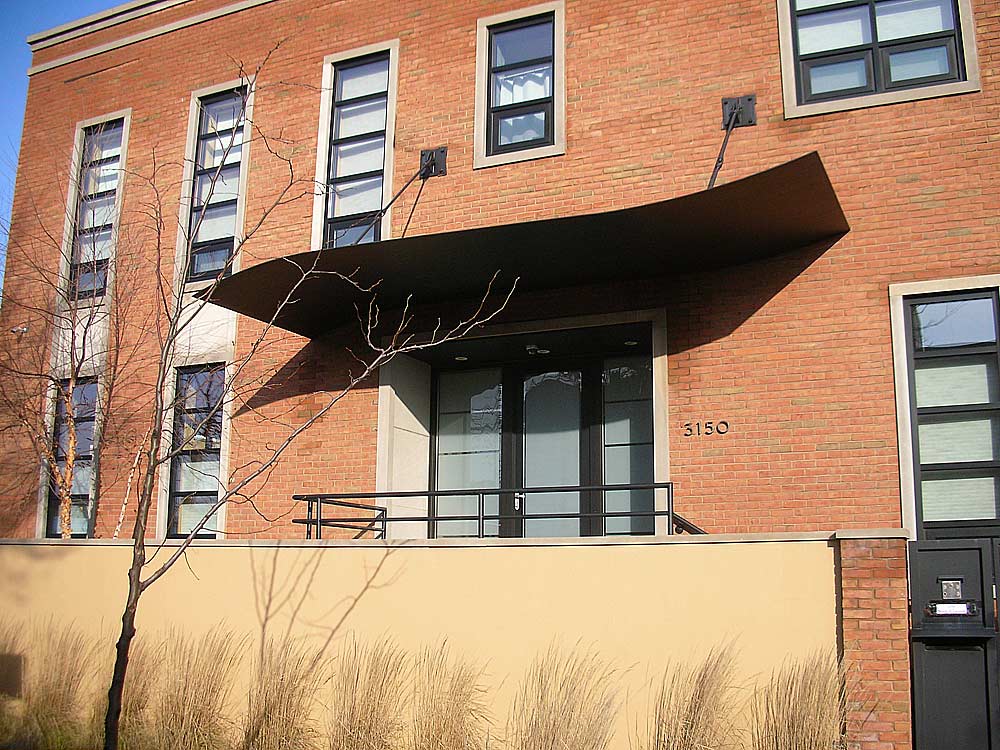 North Schubert Residence: This unique single family residence is located in the Logan Square neighborhood of Chicago. It is designed with a modern flare that creates vertical lineal windows in a very regimented pattern that work with the interior layouts. The entry is set back and delineated with an undulating curved steel canopy suspended from the face of the brick which breaks up the very lineal form of the balance of the home. It is a four bedroom two story plus basement residence with a very open first floor plan. 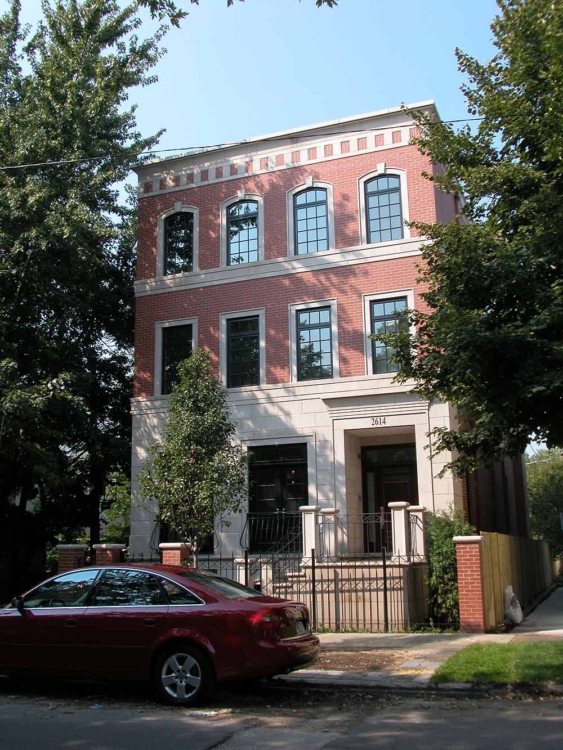 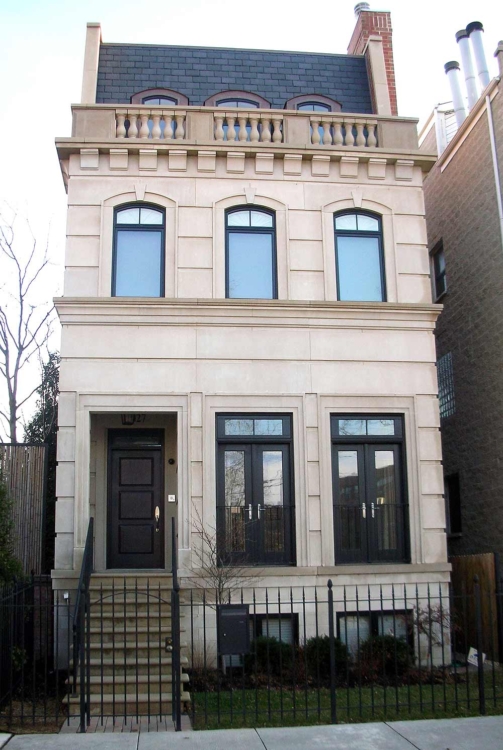 North Magnolia Residence: This all limestone façade on North Magnolia creates great curb appeal and a prominence within the block it is located. Located in the Lincoln Park neighbor hood of Chicago it is a three story plus basement five bedroom single family residence. Juliet balcony doors at the front open out to a tree lined street. 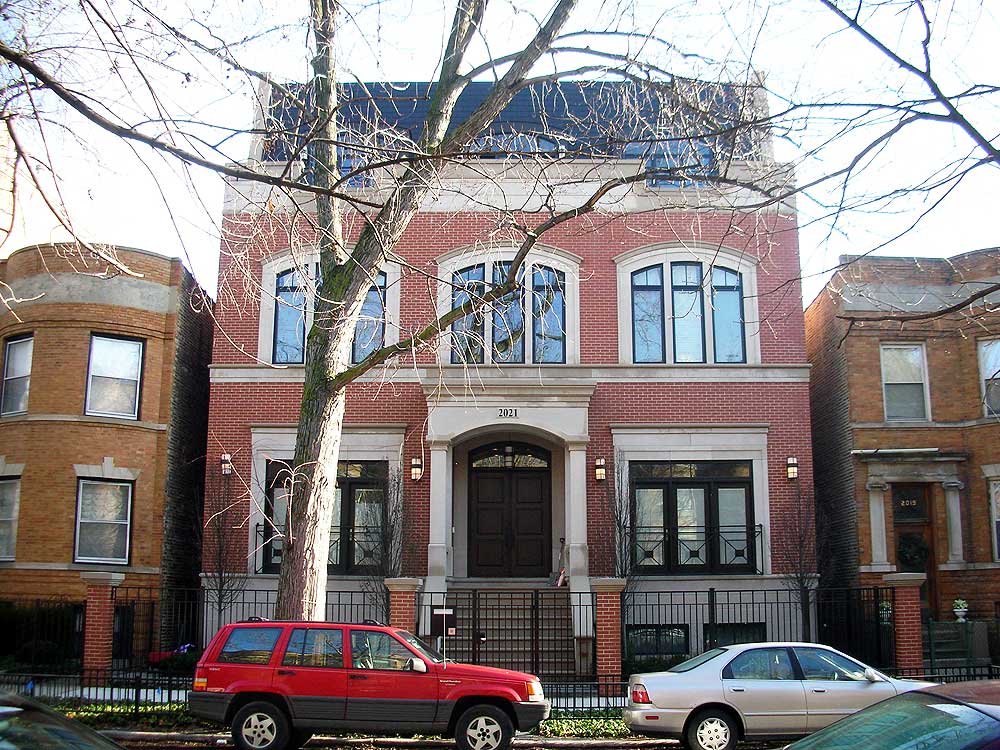 North Howe Street Residence: Located in Chicago’s Lincoln Park neighborhood, this ten thousand square foot single family residence on North Howe street is on a unique double lot, which affords it the generous rooms and custom specialty areas typical of a high end custom luxury home. The home has a roof deck with panoramic views of the city skyline located off the third floor that is a floor that is dedicated to the recreational guy. The third floor is complete with a bar area, pool table and humidor room.